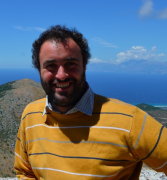 The least gradient problem (minimizing the BV norm with given boundary data), motivated by both image processing applications and connections with minimal surfaces, is known to be equivalent, in the plane, to the Beckmann minimal-flow problem (an alternative formulation of the $L^1$ Monge-Kantorovich optimal transport problem) with source and target measures located on the boundary of the domain. Hence, Sobolev regularity of functions of least gradient is equivalent in this setting to $L^p$ bounds on the solution of the Beckmann problem (i.e. on what is called the transport density) and can be attacked with techniques which are now standard in optimal transport. From the transport point of view, the novelty of the estimates that I will present, coming from a joint paper with S. Dweik, lies in the fact they are obtained for transport between measures which are concentrated on the boundary. From the BV point of view, a new result is the $W^{1,p}$ regularity of the least gradient function whenever the boundary datum is $W^{1,p}$ as a $1D$ function: moreover, the optimal transport framework is strong enough to deal with arbitrary strictly convex norms instead of the Euclidean one with almost no effort.